Montréal, October 3, 2005 – Gaston Godin, PhD, holder of the Canada Research Chair on Behaviour and Health at Université Laval’s Faculty of Nursing, is the lead author of an article that has just been published in the October 2005 edition of Vox Sanguinis. Dr. Marc Germain, Héma-Québec’s Vice-President, Human Tissues, as well as two British researchers in the field of psychology, co-authored the article. The authors’ goal was to identify which factors influence an individual’s decision to give blood or not. This first study deals with the intentions of the general public in Québec. A second study—which will concentrate on the intentions of donors—should be published in 2006. 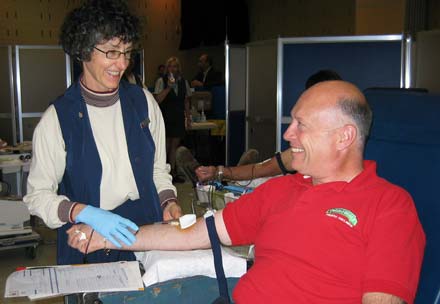 The article, entitled “Factors explaining the intention to give blood among the general population,” stems from a detailed research report submitted to Héma-Québec in January 2004. That study was aimed at determining and objectively measuring the psychosocial factors that explain an individual’s intention to donate blood. Since only 3% of the Québec population gives blood on an annual basis, gaining a better understanding of these factors would help to predict and even increase the rate of participation in blood drives.

The study was conducted by means of a mail-in survey. A questionnaire was drafted and later validated by focus groups representative of the entire Québec population. The Régie de l’assurance-maladie du Québec (RAMQ) then provided a random sample of 4,000 individuals aged 18 to 70 years. Of this number, 38% responded to the questionnaire. On the whole, the respondents were quite representative of the general population, although researchers noted a slight overrepresentation of women and individuals aged 50 to 70 years. Furthermore, residents of the Québec City area were overrepresented in comparison to those from the Montréal region.

Respondents indicated a rather neutral intention to donate blood over the course of the next six months. Among those who had already given blood, the more recent was their last donation, the more probable it was that they would give blood again. The findings of statistical analyses reveal notable differences between those who had already donated blood and those who were donating blood for the first time. Thus, among respondents who had already given blood, personal beliefs (e.g., sense of duty) and perceived social roles (e.g., being in good health) were the main factors at play. On the other hand, among those who had never donated blood, such a decision would appear to be based on attitudes. If individuals find that there are benefits to giving blood, they are more likely to do so.

The findings of the study have resulted in various recommendations. Blood donation campaign marketing efforts should focus on overcoming and eliminating the real or perceived barriers and obstacles to giving blood. Implementing measures to encourage blood donations and reassuring the population with respect to control measures should prove effective. Furthermore, promotional strategies should be more highly targeted, given that individuals’ previous blood donation experiences play a determining role. Héma-Québec is already examining these recommendations in order to improve the efficiency of its future campaigns.

Created in September 1998, Héma-Québec’s mission is to efficiently provide adequate quantities of safe, optimal blood components, substitutes, human tissues and cord blood to meet the needs of all Quebecers; and to provide and develop expertise and services, along with specialized and innovative products, in the fields of transfusion medicine and human tissue transplantation.

Give blood. Give life.

Additional notes
Vox Sanguinis is the official scientific journal of the International Society of Blood Transfusion (ISBT). The article, published in the October 2005 edition (Vol. 89, No. 3), may be consulted on the journal’s Web site at the following address: http://www.blackwell-synergy.com/loi/vox.

The Canada Research Chair on Behaviour and Health at Université Laval is funded by the Canadian Institutes of Health Research. Its research involves studying factors contributing to the adoption, retention and modification of individual and professional behaviours in the health field. Its goal is to gain an understanding of the processes involved in adopting behaviours in the health field, in order to develop more effective response tools.