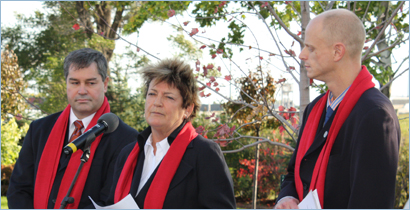 Montreal, October 9, 2008 - In 2007, the Canadian Hemophilia Society (CHS) has launched a program to commemorate the tainted blood tragedy... lest we forget.

As part of this initiative, a commemorative Tree of Life will be planted today at Héma-Québec’s Montréal establishment, in the presence of the Québec Minister of Health and Social Services, Dr. Yves Bolduc, and representatives of the national and Québec offices of the Canadian Hemophilia Society. A first Tree of Life was planted on November 26, 2007, at the offices of the Canadian Blood Services in Ottawa, as part of the tenth anniversary of the tabling of the report from the Commission of Inquiry on the Blood System in Canada (also known as the Krever report). There are also plans for Trees of Life to be planted in other provinces. 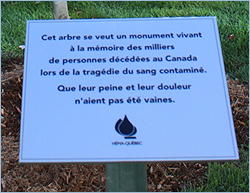 Today’s celebration coincides with Héma-Québec’s tenth anniversary, after taking over from the Red Cross and becoming the organization charged with managing the blood supply in Québec on September 28, 1998. “Héma-Québec was created as a supplier responsible and accountable for the quality of blood products intended for patients. By exercising a constant leadership with respect to the safety of the blood collection and distribution system, Héma-Québec has gained the trust of the people of Québec. In fact, Héma-Québec’s commitment to blood safety earned it the recognition of the Canadian Hemophilia Society on a number of occasions. These achievements are the result of a massive and sustained effort,” explained Dr. Francine Décary, President and Chief Executive Officer.

Thousands of Quebecers who received a blood transfusion in the 1980s contracted HIV and/or hepatitis C. More than 65% of those who contracted HIV suffered from hemophilia or other inherited bleeding disorders. Other people received transfusions for other reasons (trauma, surgical procedure, childbirth, cancer, etc.). Unfortunately, three-quarters of these HIV tainted blood victims died as a result.

“Following the tragedy in the 1980s, the CHSQ somewhat took on the role of watchdog for Québec’s blood system, in collaboration with key stakeholders,” declared François Laroche, President of the Canadian Hemophilia Society—Québec Chapter (CHSQ). “We made a commitment to our members to make sure no such event happens again.”

The Health and Social Services Minister Dr. Yves Bolduc, declared that “the creation of Héma-Québec was a major milestone in the consolidation of Québec’s transfusion activity support systems”, reiterating that the organization is responsible, since 1998, for supplying safe, optimal blood components, human tissues and cord blood to hospitals. “Héma-Québec embodies the priority that each health establishment attributes to this unavoidable issue. A ceremony such as the one we are attending today is a touching reminder of the extent to which vigilance is crucial when acting upon people’s health”, he added. “The CHSQ wants to point out the efforts made by the Government of Québec and Héma-Québec to secure Quebecers’ trust once again in their blood supply system, in particular by establishing the Hemovigilance Committee, the Comité consultatif national de médecine transfusionnelle, and Héma-Québec’s various committees, to name but a few,” added Mr. Laroche. “Intent on making our contribution, we take part in several of these committees, through which we are all working together to make Québec’s blood supply system one of the safest in the world.”

The theme for the commemoration—the tree of life—was so chosen because the tree is an important symbol around the world. It represents life, with its branches reaching for the sky and its roots burrowing deeply into the earth. Families of victims will see it as a tangible way of perpetuating the memory of the loved ones they lost. The CHS sincerely hopes that this movement will lead to a forest of commemorative trees across the country. The trees are living monuments erected in the memory of the thousands of people who died following the tainted blood tragedy in Canada. Let’s make sure their pain and suffering were not in vain and are never forgotten.

Héma-Québec aims to efficiently provide adequate quantities of safe, optimal blood components, substitutes, human tissues and cord blood to meet all Quebecers’ needs; provide and develop expertise along with specialized and innovative services and products in the fields of transfusion medicine and human tissue transplantation.
Give blood. Give life.
-30-