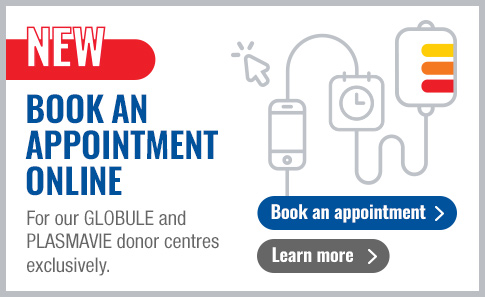 Apheresis donation: how does it work?

What is apheresis donation?

This type of donation involves the use of an apheresis machine, a device that:

In other words, the term apheresis refers to a collection technique by which blood components (platelets or plasma) can be collected selectively.

What is each blood component used for?

Platelets are often prescribed after chemotherapy (treatment used for certain cancers, such as leukemia).

Why donate by apheresis?

To better meet needs... When a person receives a transfusion, he or she receives only the blood component he or she requires. Donating by apheresis makes it possible to:

Many donors prefer donation by apheresis. View their video testimonial.

Where can you donate by apheresis?

Ronald thinks it's incredible for a few reasons.

Donald decided to try it and was hooked.